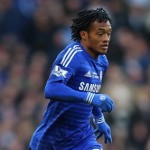 It has been reported that Chelsea winger Juan Cuadrado admits he almost gave the game away as a teenager in Colombia.

It was only the devotion of his mother Marcela, who worked as a housemaid and on a banana plantation, that enabled him to attend a football school.

Cuadrado said: “I had difficulties as a kid. Several teams rejected me but I persevered, I kept going.

“Football was what I wanted and thank God doors opened for me to show my ability. You can never give up on a dream you have had since you were a kid.”