It has been reported that Chelsea midfielder Cesc Fabregas was delighted with victory over former club Arsenal. 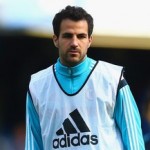 The Spanish international midfielder put in a fine performance against his old club in the Barclays Premier League contest and provided a wonderful pass from which Costa notched the hosts’ second goal.

Asked afterwards if the victory had been sweeter given the negativity aimed towards him by some Arsenal supporters, the former Barcelona star told Sky Sports 1: “Not at all.

“I have huge respect for Arsenal – they gave me everything when I was little. Without them I wouldn’t be here and I wouldn’t have won what I have won.

“I have huge respect and I take it in a positive way. I know they love me and it is all because we were together once.

“Sometimes, circumstances mean these things can happen. But I have always said it – I am not scared. They will always be in my heart forever.

“But this is football, I am in this fantastic football club now playing with great players, a great coach and great fans and I want to win everything.

“I am hungry and really want to do well for this club. I hope I can make it in the future.” REVEALED : WHY Mourinho Is Happy To See Arsenal, Man City In The CL Wilshere and Walcott to return against Norwich tomorrow!