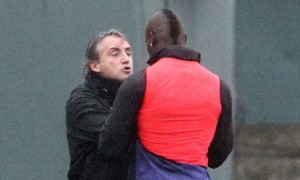 regrets-over-Mario-Balotelli-confrontation-but-wants-to-sell-Manchester-City-striker.html”>Roberto Mancini has insisted he does not regret the training-ground confrontation with Mario Balotelli which has left the Manchester City manager prepared to sanction the forward’s sale during the transfer window.

Despite publicly insisting on Friday that he was prepared to give the 22 year-old “100 more chances” and that he would fight to keep Balotelli at Manchester City, it is understood that Mancini has made it clear to the club that he will not object to him being sold this month.

AC Milan, who could now fund a bid for the Italy striker after completing the £12 million sale of Alexandre Pato to Corinthians, remain the likeliest destination for Balotelli, but the player’s £170,000-a-week wages will be an obstacle to any deal being done quickly.

Yet despite the negativity generated by images of Mancini grappling with Balotelli on the training pitch, the City manager insisted he did not overreact by physically challenging the player.

“No, I did nothing.” Mancini said. “I wanted Mario to leave the pitch, Mario said, ‘no I don’t want to’. The photo is worse than what happened. I know it is unusual for a manager to do this but I’m not regretful. The problem we have is that it happened on the only pitch here where we don’t have a screen, but we’re happy for the paparazzi if they earn money from this.

“These sort of things can happen at any club. But the difference is that other clubs probably have screens around their training pitch. We don’t have a screen.”