Reports are out claiming that Bournemouth’s club-record signing Benik Afobe insists he has nothing to prove to his former side Arsenal when the Cherries meet the Gunners on Sunday. 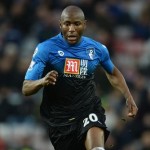 Afobe, who was sold to Wolves from Arsenal before making his £12million move to Bournemouth in January, has scored three goals in his last three games for Eddie Howe’s side.

As Bournemouth get set to welcome Arsene Wenger and Arsenal to Dean Court this weekend, Afobe states that there will be ‘no friends’ when he faces his former club although he made it clear that he has nothing against the North Londoners.

“I’ve got a job to do for my new club on Sunday and there will be no friends out there,” he said.

“But I don’t hold any grudges – I’ve already scored three goals in my last three games, so I’ve got nothing to prove to Arsenal.

“It was their decision to sell me and I’ve moved on. It’s been years now – I would have liked to have got my chance there, but it didn’t happen.

“I’ve got nothing bad to say about Arsenal. I’m here in the Premier League now, scoring winning goals for Bournemouth, so I just want to enjoy and keep improving.

“Arsenal were a massive influence on me because I was there from the age of about six, they helped me to progress as a footballer and I’ve got a lot of reasons to thank them.”