Reports are out claiming that Radamel Falcao has discussed what drew him to Manchester United. 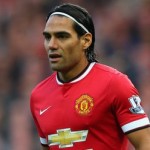 The 28-year-old Colombian international signed on a season-long loan from Monaco with a view to a permanent deal, with United paying a loan fee of £6million but a package totalling £16.4m including the striker’s £200,000-a-week wages.

However the debt Falcao feels he must repay is to United manager Louis van Gaal for showing so much faith in him.

“Playing for Louis van Gaal made the decision to come to Manchester United a lot easier. He is a winner, he has met with success wherever he has gone. I believe in what he is trying to do and what he wants to achieve here.

“He is a manager with a big reputation and I want to be a part of that. I’m here to score goals and that is what I intend to do.”

And as one would expect him to say, he believes that United can win the title this season.

“Why can’t we win?” he asks. “They are realistic expectations. I think success will come. It’s been a difficult period for the club but with the new signings and a great manager it’s only a matter of time before United are back to their best and winning trophies.

“There are a lot of new faces and it’s a period where people will need to get to know each other. However, you are talking about a lot of top-quality players who are all very intelligent, so I’m sure they are bright enough to assimilate any plans or tactics the manager has in mind and however he wants to set us up.”