Reports are out claiming that Arsenal striker Olivier Giroud says he received a “helping hand” for his goal in victory over Champions League opponents Bayern Munich. 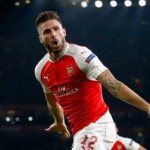 The France international came off the bench to bundle home Santi Cazorla’s free kick in the 77th minute, an effort that appeared to bounce off his hand before finding its way into an unguarded net.

“I’ve had a bit more luck than in recent weeks, so I’m making the most of it. For a striker, it always works in cycles and I know that. You can’t start doubting yourself,” Giroud told reporters after the game.

“All the qualities are there — I just needed a helping hand from destiny, and tonight it worked out in my favour. It’s certainly not my most beautiful goal but it’s one of the most important.”