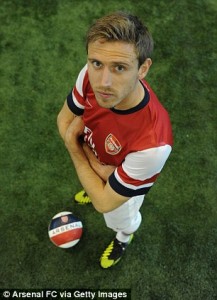 Monreal, who could be thrust straight into Arsene Wenger’s creaking defence for Saturday’s Premier League clash with Stoke, has admitted he is excited to be reunited with his former Malaga team-mate Cazorla at Arsenal, as he predicts the good times are about to roll for Wenger’s men.

“I spoke to Santi, we had a long conversation about things,” Monreal told the Arsenal website. “I asked how things were here and he only had very positive things to say.

“He said that the club was a massive club, the people are great and it’s really just a big family.

“As there is a familiar face in Santi, I am a lot calmer about things. Having shared a dressing room with someone who has already made this journey is a good feeling. Now it’s my turn and I can’t wait to follow in his footsteps.

“To be honest, when I was given the option to come here I went for it because it’s a massive club and I didn’t even have to think about it. Of course, there are Spanish players here and a lot of youngsters, which this club is known to attract. I’m delighted to be able to train and play with those guys and I hope my stay here will be the best it possibly can.

“I’ve watched loads of Arsenal games and there have been legends that have played for this club. I know everything I can from watching the television and from what Santi has told me in this relatively short period of time. I am sure we can be successful this season and I am really looking forward to the challenge.”