Real Sociedad striker Carlos Vela has revealed that he did not enjoy his time at Arsenal. 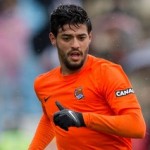 The Mexican international was with the Gunners between 2005 and 2011 before moving permanently to Spain in 2012, following an initial loan with Real.

Vela is being linked with a possible return to north London but amidst that speculation, the 25-year old suggests a move is unlikely as he was never as an Arsenal player.

“The majority of Sociedad’s players are from the youth system and this has turned the dressing room into something more familiar,” he told beIN SPORTS.

“I never felt comfortable in London and I never enjoyed it, however, when I got to Sociedad, I found a place where I was very happy, where I’m enjoying myself every day.

“The English game is very straightforward. Here, the difference is that there are more touches of the ball and that benefits me.”