Per Mertesacker has revealed that he cannot believe he’s again playing with Mesut Ozil at Arsenal. 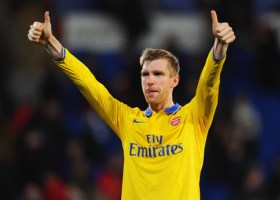 The Germany teammates are good friends from their time together at Werder Bremen.

The 29 year old told Arsenal’s website : “When we played for Werder Bremen a few years ago, we experienced good times. We used to play for the championship, though we never won,”.

“We finished second and qualified for the Champions League.

“I was in the clouds when I saw him back in the national team. Our reunion at Arsenal brought the same feeling, though I had never expected it. It was a resounding surprise.

“At Real Madrid he seemed frozen out.” Calum Chambers Will Be Important Player For Arsenal – Arteta