Reports are out claiming that Arsenal’s Alex Oxlade-Chamberlain has shed light on his injury struggles of last season. 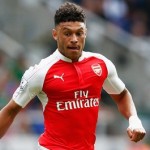 The 22-year-old England international winger revealed that he never fully recovered from the cruciate injury he suffered a couple of seasons ago but has revealed that he is now fighting fit following some frustrating times.

He said: “The injuries were a knock on effect from the cruciate injury that I had from the first day of the season a couple of years ago when we lost to Villa.

“It’s all been a chain reaction from that, just being out for five or six months for the first time in your life.

“It ended up in my groins from the compensation and I struggled with that for a large part of last season.

“There were times when I tried to get up from the bed or from sitting on the sofa and I was in so much pain.

“I would play 90 minutes and I couldn’t get round it in my head that I was struggling with the simplest of tasks but was still playing games.

“Then towards the end of the season something turned the screw, I don’t know what. All of a sudden it went away as if nothing had happened.”