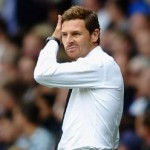 Andre Villas-Boas fears Arsenal’s probable early exit from the Champions League will shatter Tottenham Hotspur’s dream of qualifying for the most prestigious club competition in the game.

The Gunners’ difficulties in Europe have delighted supporters of their north London rivals. Arsenal lost 3-1 at home to Bayern Munich on Tuesday, leaving them on the verge of being knocked out.

With Arsenal also out of the FA Cup, Tottenham could feel they are favourites to clinch fourth place and qualify for the Champions League. Yet before tomorrow night’s decisive Europa League tie in Lyons, in which they must avoid defeat to reach the last 16, Villas-Boas was wary.

“Tuesday was a great disappointment for Arsenal, but it doesn’t help the challenge we have to play against them,” said Villas-Boas, whose side will face Internazionale or Cluj if they advance. “They will put even more focus on the Premier League.

“In an ideal world, to have Arsenal continue in that competition and get tired playing in the Champions League would be better for us. We want to be happy with British teams going forward in the competition, but the north London rivalry is very special.”