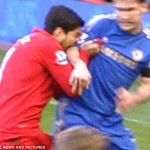 Luis Suarez says he wants to leave Liverpool as the club cannot match his ambition of playing in the Champions League and winning titles.

The Uruguay international, who scored 23 goals last season as Liverpool finished seventh in the table, has repeatedly spoken of his discontent with life in England this summer.

Arsenal have made a concerted effort to sign him nonetheless, while Chelsea and Real Madrid are also reported to be interested in recruiting the 26-year-old.

While Liverpool’s stance remains that they are unwilling to sell Suarez, the forward says he will listen to offers as he wants to join a club capable of challenging at the top level.

“If I receive an important offer to progress my career, I will study it,” Suarez said in quotes reported by Sky Sports. “Some clubs have asked about me but I hand questions over to my agent. I am no stranger to rumours.

“I always want to improve. That’s why I left Ajax for Liverpool.

“But this club needs to fight to enter the Champions League and, when it doesn’t happen, it damages the morale of any player. So I’ve suffered.
“It is hard to view the Premier League every week with never a chance of winning it.

“On top of that, the English media do not understand me. The controversies with (Patrice) Evra and (Branislav) Ivanovic were decisive. There are always extra questions when people analyse me.

“After the Evra incident, it was very difficult to convince people about the ‘real’ Luis Suarez. Things had improved but then the incident involving Ivanovic was another blow.

“Had that not happened, perhaps I would have been regarded as the best Premier League player last season.”