Bastian Schweinsteiger has revealed that the challenge of bringing the good times back to Manchester United is why he made the move. 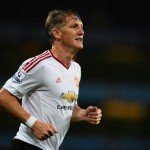 Schweinsteiger hopes to increase his already incredible medal haul, which includes eight league titles, the Champions League and the World Cup, in his time at Old Trafford.

He told BILD: “It’s not like I can say: I have signed for three years, now we’ll win three straight titles.

“The Premier League is a very strong league. Chelsea, Manchester City, Arsenal and Liverpool all have a high quality.

“But those who know me also know that I always want to win titles. And I think that Manchester United are a club which can win titles.

“I am convinced that it is possible to usher in a new era at Manchester United- especially under Louis van Gaal.

“Just like when he took over at FC Bayern. That excites me.

“I can promise that I will give it my all and will try to help the club reach the level of Real Madrid, Barcelona and Bayern once again.”