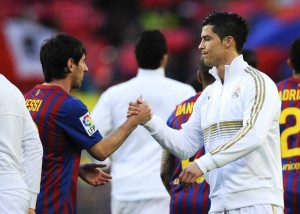 Cristiano Ronaldo has expressed a desire to play alongside Lionel Messi before the end of his career.

Speaking to reporters from a popular women’s magazine Ronaldo said “Let’s face it, i am the best, everyday i wake up and look in the mirror and all i see is the best player in the world – me. However there comes a time when you feel like you would want to pass the ball to the second best player in the world, which is currently Lionel Messi, the whole internet is abuzz with his recent record of scoring against 19 La Liga teams in a row, but what about me? i have scored against all 20!.”

The portugese admitted that it may not happen so soon, “Right now my agent is talking to several interested clubs, i mean who am i kidding? everyone’s interested but only a few can afford my monthly hair maintenance fee, so for the time being i have to put Messi’s ambition of playing beside me on hold.”

Ask by reporters if he would join Man utd again he said ” What? Utd?, no way i’m going back under Sir Alex, he’s good and all but i just cant take his chewing gum habit, do you how much sugar are in those things?”

Messi who was contacted regarding this article declined to comment, only stating that his trophy cabinets speaks for iteself.