Manchester United defender Phil Jones has declared that he will not change his style. 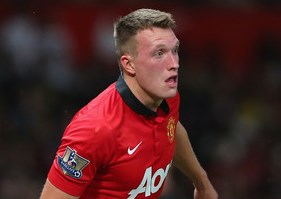 The 21 year old England international is currently sporting a head wound from a clash with Arsenal striker Olivier Giroud on Sunday.

“I do get a few bumps and bruises,” confessed Jones.

“That’s just the way I play and I’m not going to change. I want to be strong and aggressive in attack and defence and it so happens that I pick up a few knocks.

“I’ve always been the same, with cuts and grazes from falling over in the playground; knees, ankles and all sorts in Sunday League football but I’ve never broken any bones.”