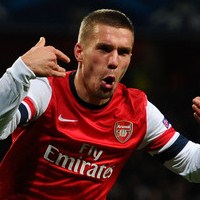 Lukas Podolski professes he would be happy to see Gonzalo Higuain come to the Emirates this summer.

The 25-year-old Real Madrid forward’s future has been the subject of unrelenting speculation with the Gunners thought to be close to pulling off a spectacular coup for the Argentine.

However, despite increasing their offer from £21m to £23m, sources in Madrid have revealed that a deal is far from complete.

Though Higuain’s potential arrival could put Podolski’s first-team position under threat, he is not overly worried.

“It is always good when good players come in, I don’t worry about a specific player and it is certainly not a problem,” Podolski told The Sun.

“I am strong enough and I have qualities and when good players come in, I will play with good players.

“The hope is that this season Arsenal will be at the top of the league.”