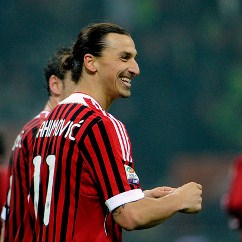 AC Milan ace Zlatan Ibrahimovic he could have been an Arsenal star.

AC Milan face Arsenal in the Champions League last 16 next year and in his autobiography, ­Ibrahimovic ­revealed that he had a meeting with Arsene Wenger 10 years ago at the London Colney training ground.

He was a blossoming ­talent with Malmo and was invited to meet Wenger. In his book, ­Ibrahimovic recalled the encounter.

““I shuddered a bit at Wenger’s eyes,” he said. “He tried to, like, see through me or find out who I was deep down. ”

“He is a guy who takes up psychological profiles of the players.

“Are they emotional and stable — stuff like that. He is careful, as are all great coaches. I just sat quietly and was shy but after a while I lost my patience. Something with Wenger provoked me. He flew up from time to time and checked who was outside his window. He seemed to have total track.

“He then wanted me to have a trial game.” Per Mertesacker Closing In On Arsenal Return