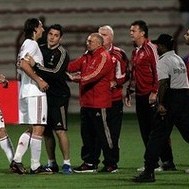 The Irishman took issue with a heavy challenge by Ibra on one of his players and had to be held back by colleagues as he hollered at the Swede who in turn taunted O’Leary from a distance.

Afterwards, O’Leary said: “I wouldn’t want to talk about him (Ibrahimovic). It’s been a pleasure to have AC Milan here.

“It’s a club I’ve admired for a long long time. I’ve been lucky at Arsenal to play against them and then to be manager against them. It was a lovely evening. I hope Milan got what they wanted out of it and Robinho is alright. I hope they go on to win the league as well.”

Milan coach Massimiliano Allegri said: “It was just a nervous moment between the player and coach. It died out immediately after that.”