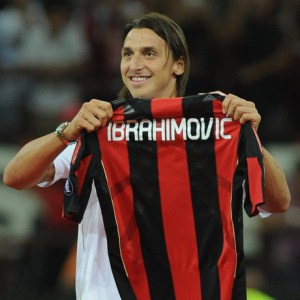 New AC Milan striker Zlatan Ibrahimovic has revealed that he is thrilled to make the move to the Italian giants.

The Swedish international striker will complete the move today pending a medical this morning.

“When I heard Milan were interested in me, I was immediately excited. I’m happy it all went well, it’s a great move,” he said of the loan and option to buy from Barcelona for €24m.

“I came here to win, am sure we will win and I won’t leave Milan until we’ve won. I know I’m in the best team in Italy and one of the best in Europe.”

That is already a message to his former teammates at Inter, who have dominated Italian football in recent years and are fresh from a Treble-winning campaign.

“I have great memories of Inter, but this is the past. I was also a Juventus player, don’t forget. Inter won everything, so they have other things to worry about rather than me.

Ibrahimovic also said : “When I heard that Milan were interested, I immediately said yes. Everything that Adriano Galliani has done in the last few days and all the players I saw convinced me.

“I spoke to President Silvio Berlusconi and Coach Massimiliano Allegri. The President gave me a warm welcome.”