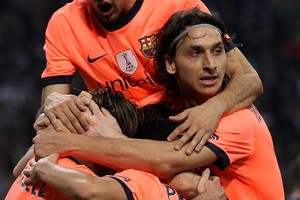 Former Inter star Ibrahimovic was stunned as Materazzi turned on Balotelli after the youngster threw away his shirt at the end of their 3-1 win.

Ibrahimovic told reporters that : “I saw that Materazzi was attacking him in the players’ tunnel and I’ve never seen anything like it,”

“If I were him, I’d have left Mario alone, but Materazzi was attacking him and I was stunned. If Materazzi had attacked me like that, I would’ve decked him in a second!

“Materazzi was causing all sorts of trouble and in the Barcelona locker room we were amazed, all talking about it. A player should be proud after a win, not chase down a 20-year-old to berate him.”