Reports are out claiming that Arsenal legend Paul Merson has criticised manager Arsene Wenger for a recent lack of transfer activity and believes his former club has no chance of winning the Premier League this season. 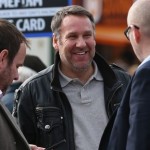 Wenger failed to lure the services of a quality striker after being linked with the likes of Karim Benzema and Edinson Cavani in the summer transfer window and the latest injury setback to Danny Welbeck has infuriated the Gunners faithful to no end.

“The fans think ‘what are we coming for? We turn up every week, we pay the highest prices and what for? Top four? We might get a day out at Wembley again in the FA Cup. Wow-wee.

There’s a saying in life: Keep on doing the things you do and you’ll get the same results. How different is this season going to be for Arsenal? It’s the same team that finished 12 points behind Chelsea last year. Why, this year, will this team finish above Chelsea?

“I can tell you now, there will be a phase this season when they’ll be unbelievable, win seven on the trot and play the best football you’ve ever seen. But at the end of the season, with this team and no signings, I’d be absolutely shocked if they won the Premier League.”