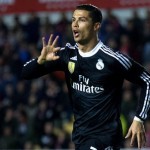 It has been reported that Real Madrid legend Ronaldo was back in Spain for their win over Malaga.

The Brazilian football icon believes Real can still pip Barcelona for the title.

“I feel at home here, though I don’t visit as much as I’d like. I love to be here with the people I spent so many good years with,” he said.

“It will go down to the wire between Barça and Madrid.”

Asked which Real player he’d like to play with, Ronaldo added: “I’d love to play alongside Cristiano Ronaldo. It’s not possible but it would be spectacular.”