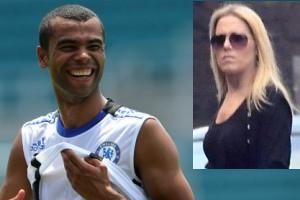 The 30-year-old secretary’s identity leaked out after football fans named her in online forums.

She is alleged to be linked with at least two other Premier stars.

Newspaper reports revealed that blonde Gough had a fling with Cole in October 2008 and the pair exchanged hundreds of lurid texts.

It was also said that Cole twice smuggled her into the team hotel for sex.

It is said that the Anfield club are now investigating to see if Gough’s alleged relationship with Cole impacted on the club.

A spokeswoman for Liverpool FC said: “We are aware of the story and will examine the facts to see if they have any bearing on the club.”

Insiders said the secretary’s job could be on the line if she is deemed to have brought the Premiership club into disrepute.

Gough spent two nights with Ashley in a hotel rooms in Lincolnshire and Birmingham in late 2008.

David Luiz Eager To Take Up Leadership Role At Chelsea