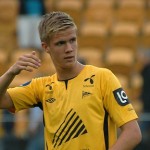 “I was told before the game that they were there to watch me. It made me a little extra nervous, but it is incredibly fun,” says Ajer, referring to Premier League scouts now monitoring him.

“It’s fun and inspiring to know. And extra fun that I scored.”

Ajer has trialled with AS Roma in the past.