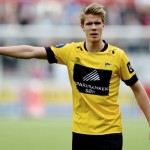 The teen is interesting PSG, along with Arsenal, Tottenham and Juventus. But he insists he doesn’t want to skip out on Start at this stage in the season.

“I could leave now, but I am aware of the situation occurring with Start,” said Ajer.

“I have to finish the season here, later we’ll see.

“Yes, there were offers, but it did not go further.”