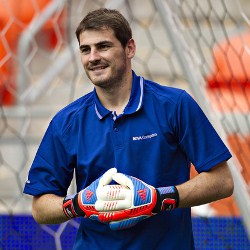 Iker Casillas is confident that there is more room for improvement in the defending champs.

Real Madrid gained some consolation from the fact they at least ended a four-year wait for Primera Division honours, and the Spanish international wants the team to win as many trophies as possible this season and not just focus on Europe.

“We want to go one step further, as we have done over the last two seasons since Mourinho arrived,” said the goalkeeper on realmadrid.com.

“We want to strengthen the team and we have more responsibility, more experience and we want to win all the titles: the Spanish Super Cup, which is the first title up for grabs, defend the Spanish league title, the Spanish Cup and we want and hope to win the Champions League having not won it these past years.

“With the team we have, the players, the fans and the stadium, this team deserves the European Cup.

“Winning it is not an obsession, however, as we must also concentrate on winning the first league match and then the Super cup.

“The season is going to be very long, but I’m convinced that with the squad we have we can fight for all the titles.”

Casillas also paid tribute to Mourinho and the impact he has had since taking charge two years ago.

“Until you meet him you don’t realise that he is nothing like what you read about him in the press,” said Casillas.

“He is a committed manager and has got the best from every single player. The club was clearly right to hire him.” Dudek Set For Surgery After Suffering Fractured Jaw Against Auxerre