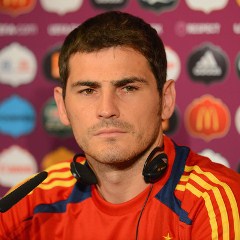 The shot-stopper was called into a series of tough saves during the 1-1 draw with Italy that opened Group C.

“The draw was the right result, as both sides never gave up and attacked to the end,” he told Rai Sport.

“Both Italy and Spain have the players to get them into the knockout rounds of Euro 2012. A point each was fair.”