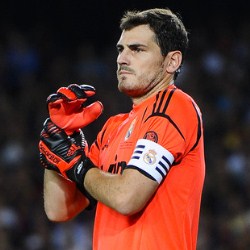 Iker Casillas has revealed that he feels he has eight more years at the top.

The Real Madrid and Spanish international goalkeeper revealed that his dream is to retire at Real Madrid at the age of 39, having spent three decades with the Spanish giants.

Looking to the future, goalkeeper Casillas told his club’s official website: “It would be a dream come true and a real joy to finish my career at a club where I had the privilege of starting out when I was just nine.

“I’m also aware that it gets more difficult all the time, you have more demands on you, there are always those who set the bar higher and the people don’t allow you to fall below that. It’s an added responsibility for me.”

He added: “I’m happy because I never thought that I would be here so long, even though it was my dream. The years go by quickly, but I’m really pleased with all the things that Real Madrid has given me and all that I’ve given the club.”