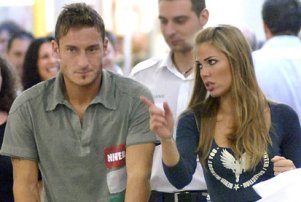 Francesco Totti’s wife has revealed that the Roma captain should be in Italy’s squad for next year’s World Cup.

Ilary Blasi, the wife of Totti, has told her husband to end his international exile and declare his availability for the Azzurri.

Ilary said told reporters that if she was Francesco Totti, she would definitely play for La Nazionale.

The player’s wife also told that the World Cup finals are taking place in South Africa and that it would be a wonderful trip as they have never been there.

Ilary also said that Totti is a good player and he deserves to play for La Nazionale.

Pablo Daniel Osvaldo Hopes To Stay With AS Roma