Arsenal attacker Lukas Podolski has declared that he will only return to Germany for FC Cologne. 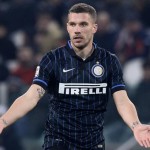 Podolski is expected to leave Arsenal this summer and been linked with Everton and Galatasaray.

After featuring for Germany in their rout of Gibraltar, Podolski was asked about playing in the Bundesliga next season.

“Everyone knows that FC is my club,” he replied.

“I couldn’t see myself going elsewhere (in Germany).”

Podolski continued: “I have had no talks with Arsenal. Somewhere in the wide world I’m going to play football. I will play until I eventually lay among the grass.”