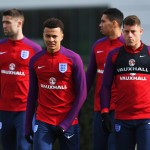 The 20-year-old has enjoyed a superb start to his Premier League career this season and has firmly established himself as a key member of Mauricio Pochettino’s side.

Speaking to Copa90 as part of a ‘Fifa & Chill’ episode which will be made available next Tuesday, Alli was asked to choose between playing for Arsenal and retiring.

His response to such a scenario will be music to the ears of Tottenham fans around the world: “I’m hanging my boots up.”