Manchester City midfielder Yaya Toure has admitted that he is cooked after a long, draining season. 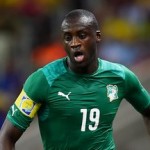 The 31 year old was left gutted the Ivory Coast’s World Cup exit to a last-minute penalty by Greece in their final group game.

The former Barcelona star has also had to cope with the recent death of his brother Ibrahim at the age of 28 from cancer.

“I gave everything I could but sometimes it was not enough. I suffered in silence, I kept to myself. I admit that I’m completely drained: worn out, both physically and mentally.

“All these emotions on top of each other have totally exhausted me.

“I am out of energy. After the World Cup, I will take myself away from it all for a while.” We are interested in Cavani and El Shaarawy – Mancini