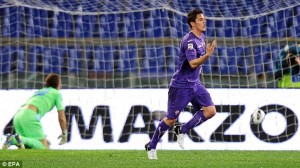 Montenegro striker Stevan Jovetic says he would love to play in the Premier League and is delighted to be linked with Arsenal and Manchester City.

The forward, who plies his trade for Fiorentina in Serie A, hailed English football and offered encouragement for potential suitors.

The 23-year-old will cost between £20-25million and Arsene Wenger has made him a key transfer target for the Gunners.

‘It sure is nice when you are interesting big clubs like Arsenal and Manchester City,’ he told the Daily Star Sunday.

‘I’m very comfortable in Italy but the Premier League is at the top of the football world – and perhaps the best.

‘Who knows? Maybe one day I will be playing at one of the English clubs.’
But he will be looking to shoot the English national side down on Tuesday.
He has scored 10 goals in 21 games for Montenegro and is confident that his side will impress in the forthcoming World Cup qualifier.


It’s OK for the fans to criticize Rio – Steven Gerrard