Reports are out claiming that Arsenal midfielder Jack Wilshere was pleased to see action in the FA Cup final. 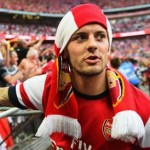 The 22-year-old central midfielder allayed fears he may be a fitness concern for England ahead of this summer’s World Cup.

“It was nice to get on and I just wanted to be part of it. The boys done well and it was easier for me to come on with 15 minutes to go.”

The future of manager Arsene Wenger has been the subject of much debate this season but reports suggest he will sign a new contract at the club later this week.

“We would like to thank our fans really deeply, we realise how much they love our club and we are grateful for that,” said the Gunners boss, who was soaked with champagne in the players’ post-match celebrations at Wembley.

“Our players are great, but our fans are even better, they show it again today.” Lyon Prepared To Sell Alexandre Lacazette To Arsenal For £21M