John Terry has declared that he is fighting for his footballing future with Chelsea. 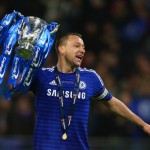 The 34-year old former England international centre-back is contracted until the summer after penning a one-year deal in May last year and admits he is doing everything he can to win another deal with his beloved club.

“I am fighting for my future, for my family’s future and I want to give it everything,” the Blues captain told The Express in the wake of lifting the Capital One Cup on Sunday.

“The uncertainty has helped me positively, not having a four- or five-year deal, because the roles are reversed. Now the power is in the club’s hands. That has inspired me.

“The manager has come in, sat me down, and made it clear that if you work hard you will get extra years and you will play, but if not there are others who are younger who can play and will fight for their places.

“This is a year-on-year rolling deal. I don’t know how long I have left. Hopefully I have a few years but if this is my last then I hope I will go out on a bang.”