Robin van Persie has declared that he is not unhappy at Manchester United. 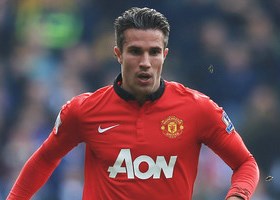 The Dutch international striker has been continually linked with a possible summer departure from Old Trafford, just two years after joining from Arsenal for £24million, because he is reportedly feeling inadequate in Manchester under David Moyes.

The 30 year old’s goalscoring output this season is not as prolific as it was in his debut Red Devils campaign, when he netted 26 goals to guide the club to the Premier League title, but a lot of this season’s undoing has to do with injuries.

The form of the ex-Arsenal skipper has been questioned in 2013/14, prompting rumours of a United demise, but he has said first-hand that he has no intentions of quitting the 20-time league champions anytime soon.

In an exclusive interview on Man Utd’s official website, van Persie insisted that he was extremely happy at the club, rejecting any press reports suggesting otherwise.

“I don’t mind if my performances get dissected and people criticise what I’ve done on the pitch,” van Persie said.

“They can talk about my game 24/7 for all I care… and a lot of those opinions and criticisms may actually be right. So I don’t mind that.

“What I need to address are the situations when people are taking it upon themselves to think for me, make assumptions, or interpret things as if they are me. Last time I checked my head was still attached to my body, so I’m the only one who knows exactly what I’m feeling and that is not what I or the fans have been reading.

“The truth is I’m very happy here at this club. I signed for four years and I’d be delighted to stay even longer, beyond the next two years I have left on my contract. This is how I feel, although it’s not what has been suggested in the media.”

All the negativity directed at the Holland national team captain comes after scoring 11 goals in just 17 league appearances this season which shows just how much he is held in high esteem in the football world.

Sure, he has seen United fall out of the top five but he has performed to an acceptable level when he has been fit. The same cannot be said for a number of other ‘top-line’ Red Devils ‘stars’.