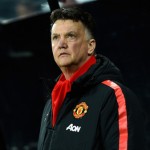 Manchester United boss Louis van Gaal has declared that he is no different from Jose Mourinho – he’s hungry for trophies.

Now LVG’s side face Arsenal in the FA Cup quarter-final at Old Trafford tomorrow night and the United boss said: “Yes, as a manager I’m also like that.

“I want to reach the goals we have set. They are to finish in the first four in the Premier League and a cup – or a title as I call them – would be fantastic.

“When you win the FA Cup, you are not in the Champions League but you have a title and for the players and the manager that is fantastic.”