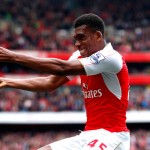 Reports are out claiming that Alex Iwobi was proud of his role in Arsenal’s victory over Watford.

In just his second Premier League start Iwobi scored once more, adding to his well-taken effort against Everton last month with the second in a comfortable Emirates win.

“Happy for the team, glad we won, it’s all for the team and I’m glad we’ve got the three points,” he told BBC Sport.

“When you’re young you dream of this and this is like a dream come true, winning with this team.

“Winning the title would be amazing but we’re taking each game as it comes, game by game, and we’ll see where we end up come the end of the season.”

Wojciech Szczesny : Arsenal Can Beat Anyone!