It has been reported that Manchester United interim manager Ryan Giggs is full of pride taking the job this week. 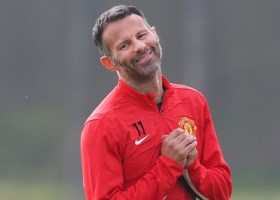 The 40 year old came through the youth ranks at Old Trafford and was part of the famed ‘Class of ’92’ that helped contribute to so much of the club’s success under Sir Alex Ferguson.

The club’s record appearance maker could not hide his delight at being appointed interim manager.

“I am proud to be managing Manchester United for the remaining games,” said Giggs, who has played 962 times for the club.

“It’s a club I’ve been associated with for 25 years and it’s a proud moment for me and one I will enjoy.

“I’ve enjoyed the week and I’m proud more than anything. It’s probably the proudest moment of my career.

“It has been a difficult week for the club and it was a shock to me on Tuesday when I spoke to Ed (Woodward) and he informed me David (Moyes) was leaving and then asked me to take over.

“It’s been a bit of a whirlwind week for me but one I’ve enjoyed – it has been different, chaotic and I’ve been getting a little taste as it’s my fourth day in the job.

“I can never imagine what you have to do and things it entails being a Manchester United manager.”

A lot of United fans would like to see Giggs in charge next year, but he refused to reveal his plans beyond the end of the season.

“After that, I’ve not really thought about it.”