It has been reported that Joel Campbell believes he has the capability of becoming a regular senior player with Arsenal. 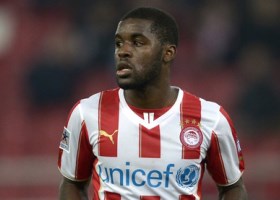 The 21-year old Costa Rica international is enjoying a fruitful loan spell with Greek champions Olympiakos which is helping prepare him for a genuine tilt at first team football in England.

The Costa Rica international has been loaned to French club Lorient, Spain’s Real Betis and Olympiakos since joining Arsenal from homeland club Deportivo Saprissa and he believes he will soon be ready to become a quality Gunners attacker.

“They showed an interest in me when I was moving to Europe but I have been an Arsenal fan since I was a child and that’s why I chose them,” he said.

“There are a lot of good players in Costa Rica. Many of them like me think only of being a footballer and it was very exciting when some of the most important clubs in the world started to show interest in me.

“As soon as Arsenal came, I wanted to join them and I believe I am ready to play for Arsenal next season.

“I know I have the capacity to play there. I am only waiting for the opportunity. With hard work I know I can get there.”