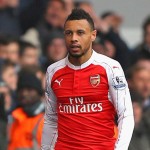 Reports are out claiming that Arsenal midfielder Francis Coquelin has made a public apology after his dismissal in their 2-2 draw at Tottenham.

The French defensive midfielder was shown red with over 35 minutes of the game still to play.

“I didn’t really see the goal [because I was in the dressing room] but someone came and told me that we scored the second one – it was a relief for me,” he told Arsenal Player.

“I did not want us to lose today because at 1-0 I thought we were doing great.

“I actually thought I could get the ball when I slide tackled [Harry Kane] – that is why I went for it. I touched him and [the referee] gave me the second yellow.

“But at the end of the day, it’s a good point and hopefully it will be an important point for the title.”