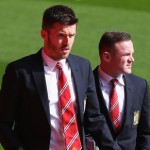 Manchester United veteran Michael Carrick has revealed that he is still working to improve his game.

The England international midfielder is still yearning to improve his game further, despite moving into the twilight of his career, and tries to learn from the very best in his role.

“You can look at a few – Andrea Pirlo, Xabi Alonso, Sergio Busquets,’ he said. ‘Busquets probably doesn’t get enough credit for what he brings to Barcelona. There’re a few out there.

“I thought Marco Verratti and Thiago Motta for Paris Saint-Germain against Chelsea were terrific, especially when they went down to 10 men. I like watching and still trying to learn from others.”