It has been reported that Chelsea boss Jose Mourinho has ruled out matching Arsenal’s Invincibles. 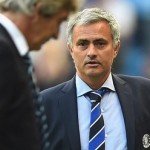 The Gunners negotiated the 2003-04 Premier League season without defeat, an achievement previously only performed by Preston in the 1880s.

“It’s something that happened once in a lifetime,” Mourinho said.

“I don’t see, in modern football with the competitiveness of this Premier League, one team being champion without a defeat.

“That will stay in the history as the second and the last time.