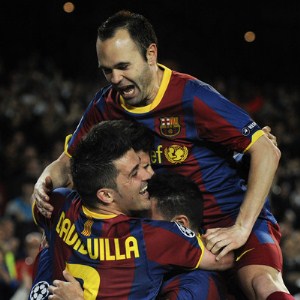 Barcelona midfielder Andres Iniesta has warned his team-mates against complacency after their Champions League quarterfinal first-leg victory over Shakhtar Donetsk.

The World Cup winning star, who celebrated the birth of his baby at the weekend by opening the scoring inside two minutes against Shakhtar, also refused to assume a semi-final place was now theirs.

He said on his club’s website: “We would be wrong if we thought that it was already done.

“I think everybody has seen the opportunities Shakhtar had. They created a lot of chances, they’ve hit the post, they had a one-on-one. In the return match we have to be careful.” I Want To Be In Football’s History Books – Neymar