Reports are out claiming that Andres Iniesta has earmarked Alexis Sanchez as the danger man for Barcelona to be wary of when they square off against Arsenal on Tuesday night. 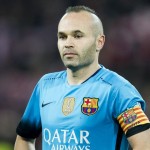 Reigning European champions Barcelona will meet Arsenal at the Emirates Stadium in the first leg of the UEFA Champions League Round of 16.

Many feel that Barcelona are overwhelming favourites to claim victory during the clash but Iniesta is not getting complacent and believes that his side have to be wary of the former Barca teammate Sanchez.

Iniesta said on Arsenal Player: “What makes Alexis so dangerous is that he is unpredictable. When he dribbles, when he attacks, he is a very strong player.

“He’s got skill and when he has the ball he always creates doubts. In that sense, we have to try to make him feel uncomfortable on the field and try to minimise his strengths.”