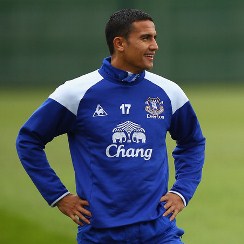 Bad news for all Everton fans as Tim Cahill has been ruled out their Premier League clash with Manchester United this weekend.

The Australian international played 120 minutes as the Toffees crashed out of the Carling Cup in extra-time to Chelsea on Wednesday night but played through injury and will miss the visit of the reigning English champions on Saturday.

Everton boss David Moyes confirmed that Cahill, along with captain Phil Neville (hamstring), will both be unavailable for the Goodison Park fixture.

“We have got a few players out. Phil Neville and Tim Cahill are both injured and won’t be available and we are sweating on one or two others after the game (on Wednesday) so we’ll wait and see,” Moyes told the club’s official website.

The Toffees currently sit 13th on the league following last week’s 3-1 victory at Fulham whilst United are now five points behind in second after their 6-1 derby humiliation at the hands of Manchester City. Luke Shaw Admits Man Utd Transition Has Not Been Easy John Stones To Plead With Everton To Accept Chelsea Offer