Alberto Gilardino struck for Bologna in the second half against Inter at San Siro to hand his team a well-earned 1-0 victory on Sunday, heaping further misery on the hosts’ Champions League aspirations.

Inter entered the match on the back of a disastrous 3-0 loss at the hands of Tottenham on Thursday, and was desperate for points to keep up pace on the upper echelons of Serie A. 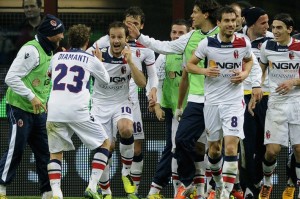