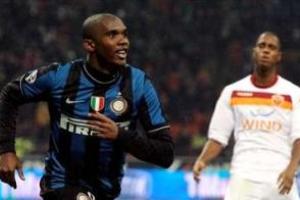 Samuel Eto’o earned Serie A leaders Internazionale a 1-1 draw with Roma at the San Siro, while their city rivals AC Milan climbed to third with a 2-1 win at troubled Lazio.

The Cameroon forward (pictured) controlled a Thiago Motta pass, spun around and drove home a diagonal strike just after the break to cancel out Mirko Vucinic’s first-half goal.

The champions now have 29 points from 12 games, five more than second-placed Juventus, who won 5-2 at Atalanta on Saturday. Inter started the weekend with a seven-point lead.

Inter coach Jose Mourinho had said former title challengers Roma were dangerous despite being in the lower half of the table and missing injured players such as captain Francesco Totti.