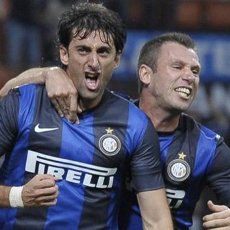 Inter Milan moved up to third in Serie A thanks to a hard-fought 2-1 win over 10-man Fiorentina at the San Siro.

Diego Milito put the Nerazzurri ahead from the penalty spot in the 17th minute and Antonio Cassano made it two 11 minutes before the interval. But a goal from Romulo only six minutes later gave the Viola hope and they continued to pile the pressure on their hosts.

A red card for Gonzalo Rodriguez in the 62nd minute diminished Fiorentina’s chances of getting an equaliser, but Inter still had to work hard for the three points, which take them above Sampdoria and into a share of third place with Lazio, four points behind league leaders Juventus.