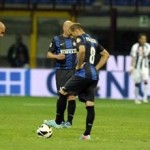 Inter ended their campaign on another sour note as Udinese announced itself in next season’s Europa League with an emphatic 5-2 victory at San Siro on Saturday.

After surging to fifth in the table on the back of seven consecutive wins, all the Zebrette needed was three points to secure European qualification for the third time in a row, and goals from Giampiero Pinzi, Maurizio Domizzi, Antonio Di Natale, Gabriel Silva and Luis Muriel set the club on its way in spectacular fashion.

Inter coach Andrea Stramaccioni had to contend with his side’s ongoing injury crisis, and his misery was compounded when, not a minute in, Allan fed Pinzi for the midfielder to leave Juan Jesus standing and rifle home past Samir Handanovic.